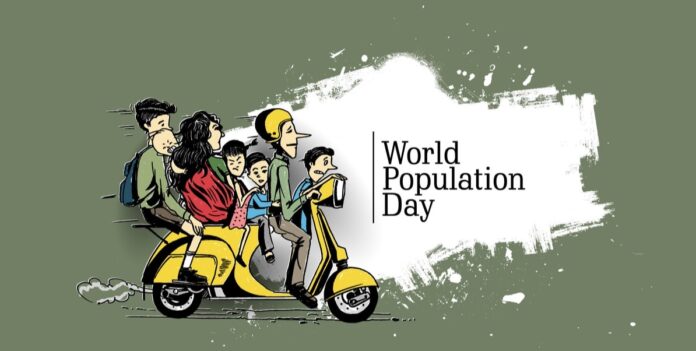 11th of July, every year is celebrated as ‘World Population Day. This year is stormed with the news related to Elon Musk not just as one of the world’s richest person but also as someone who has repeatedly warned against the possible population collapse in the near future as dangerous for human civilization. The antithesis of this is a hypothesis that the increasing population of the world has increasingly put a threat not just to the resource shortage on earth for human survival but also to the very ecological balance of the human civilization itself. In between the demographic propagandas like ‘Population Jihad’ and ‘Baby Jihad’ alleged on the Muslim community are attempts to divert the issue.

According to Malthus, the imbalance between high population growth and low availability of resources would be balanced through natural calamities, epidemics, droughts, etc. Marx, on the other hand, believed that this imbalance would be balanced through ‘class struggle’ and the triumph of the proletariat because their triumph would lead to the greater economic and educational development of the proletariat who always had a higher fertility rate. This view of Marx suggests that he looked at educational and economic prosperity as the key behind the higher or lower rate of fertility.

But Elon Musk is proposing a demographic hypothesis that suggests a non-stoppable linear demographic trend toward population decline. Till the beginning of the industrial revolution in the 18th century the global remained almost unchanged but after that, it has grown steadily. The global fertility rate has declined from its highest at 5.03 per woman/couple in 1964 to just 2.44 in 2020. This is expected to go down further and go below the replacement level of 2.1 either by 2065 or by 2100. After that, the global population is supposed to be declining globally.

Population replacement level of fertility (2.1) claims that countries/regions where a woman/couple producing less than 2.1 children on average would lead to a decline in the number of people living in such countries within a generation.

But Elon Musk’s hypothesis does not explain the increase in fertility rate among the Sikh and Jain communities in India during the last decade as explained by the recent NFHS—5 report. Quite similar is the case with many western countries that experienced an increase in fertility rate in the recent past after a steep decline. This includes countries like 14 per cent in France & Italy, 4 per cent in the UK, Denmark, and Spain during the year 1991 to 2016.

However, there are many particular countries and communities in the world whose fertility rate would remain much higher than the replacement level even by 2100. This includes most of the countries in Sub-Saharan Africa, Northern Africa, Western Asia, and the Muslim community across the world.

The end of the soviet union and the decline of marxism coincided with the emergence of another demographic hypothesis on this imbalance between population increase and available resources on this earth. This new hypothesis believes that the Muslim world has waged a ‘Population Jihad’ across the world. This population jihad was supposedly meant to increase the population of the Muslim community across the world disproportionately.

According to an estimate, the proportion of Muslims in the world would increase from currently 23 per cent in 2010 to 26 per cent by the year 2030. Only 48 per cent of Muslim women in the world use any form of contraceptive which is far lower than 63 per cent among the non-muslim communities.

However, the demographic data across the world indicate that in the last five decades, the Muslim community has reduced its birth rate and fertility rate more than most other religious communities. Among the ten countries with the highest reduction in fertility rate, six are Muslim majority countries. (Table—1).

In India also the reduction of fertility rate among the Muslim community between 2005-06 (NFHS-3) and 2019-21 (NFHS-5) was 1.1 points while the proportion of the same among the Hindu community is 0.65. (Table—2) The two states in India that have the highest proportion of Muslim population in the country have managed to maintain fertility far below the national average. But still, the population growth rate of the Muslim community in India is higher than any other religious community.

NFHS—4 categorically claims that women with 12 or more years of schooling has 1.36 more children than those who had no schooling. Similarly, educational empowerment, awareness of contraceptives, age of marriage, health services,  wealth index, etc affect the fertility level immensely.

Bangladesh is a classical example of a country that has managed to reduce its fertility rate from 6.95 per cent in 1970 to 2.07 per cent in 2017, which is below the population replacement level. Nigeria currently has the highest fertility rate in the world but she never opted for a law-based population control policy like China tried. Now China is regretting its population control policy and due to the strong policy of labour shortage and increasing non-working population in near future, the Chinese government is now encouraging fertility growth in the country.

Elon Musk’s hypothesis of population collapse could also be looked at from Marx’s principle of ‘surplus population’ as a ‘reserve army of labour for capitalism to sustain.