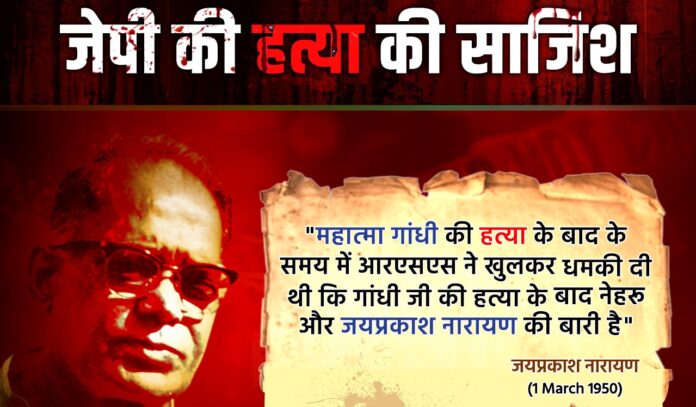 These 10 volumes compiled the speeches, interviews, letters, articles etc that he spoke or wrote during the year between 1929 to 1979. In around 7000 pages from these 10 volumes of there were more than 100 incidences when JP, criticised Rashtriye Swamsevak Sangh (RSS) along with Hindu Mahasabha and Jana Sangh.

There is only one incidence when JP is claimed to have praised RSS. BJP and RSS often quote JP while he once said in March 1975 while addressing the All India Session of Jana Sangh in Delhi, that “if RSS is fascist, then I am also fascist.”

Within a month of this, JP came out with his clarification on this claim. Jayaprakash Narayan himself denounced this statement in an interview on 20th April 1975. He said “I do not think I have anywhere described the RSS as fascist or non-fascist…What I did say at the All India Session of the Jana Sangh in Delhi was that if the Jana Sangh was fascist I too was a fascist.”  (Vol. 10, p. 444)

Jayaprakash Narayan never did any alliance or association with RSS for Sampoorn Kranti movement or Janata Party. He defended Jana Sangh at some occasions but always remained vigilant and critical about their communal activities.

When Jayaprakash Narayan allowed Jana Sangh to be part of Sampoorn Kranti movement and later Jantata Party, he kept raising many apprehension about the communal and divisive activities of RSS, Jana Sangh and Hindu Mahasabha. Even Jana Sangh was allowed to be part of the Janata Party on certain conditions. All the members of Janata Party were required to leave the membership of RSS and were not allowed to participate in any activity of RSS.

After the victory of Janata Party in the parliamentary election in March 1977, JP appointed Chandra Shekhar as the Party president with a clear mandate to enforce the solemn undertaking of Jan Sangh merging with Janata Party and ending of RSS-Jan Sangh ‘dual-membership’ within six months as agreed upon. Accordingly, soon thereafter, the Janata Parliamentary Board (JPB) passed a resolution barring Janata functionaries from their day-to-day activities in RSS. But later Jana Sangh refused to leave the membership of RSS.

The leaders of Jana Sangh kept accepting all the pre-conditions put forward by JP in order to remain in Sampoorn Kranti and Janata Party. Just before a demonstration in front of Parliament under JP’s leadership, he had told a Jana Sangh gathering that its members will not wear saffron caps or carry their own flags. Lal Krishna Advani had accepted these terms. But these leaders of Jana Sangh never kept their promises and betrayed JP once Janata Party’s government was formed in the year 1977.

Despite the fact that Jayaprakash Narayan allowed Jana Sangh in the Janata Party he never trusted them or their leaders fully. He always remained suspicious of their promises. On 3rd August 1974, JP claimed, ”I remember when I advised the SVD govt in 1967 to implement some laws the Jana Sangh ministers threatened that rivers of blood would flow if the issue was taken up. The socialist parties may go farther. All that has to be seen.” (Vol. 10, p. 326)

While S M Joshi and Kripalani was trying to convince JP of not being critical to RSS through personal letters during 1979, he remained critical of RSS. (Vol. 10, pp. 971 & 985) Jayaprakash Narayan has always been highly critical to the functioning and communal and anti-social reform agenda of Jana Sangh and RSS but under the pressure of some other socialist leaders he tried to trust Jana Sangh and RSS at least for once.

Remembering one such incident Jayaprakash Narayan says, “I happened to remark once in a public meeting that I do not know if all the parties participating in the Bihar movement will be with it till the end and I happened to mention particularly the jana sangha and Congress(O). Coordination Committee leaders asked me why I had made that remark even though they had assured me that they would be with me till the end. I told them that it was because during the coalition government they were either cold or hostile towards land reform, even towards implementing the laws that had been enacted by the Congress (United) government earlier. These leaders told me that that was seven years ago and much had changed since, including Jana Sangh. I accepted their explanation and since then have not expressed any doubt about their position.” (Vol. 10, p. 443-44)

JP agreed to this despite the fact that RSS had been highly critical to him. There was at least one occasion when JP himself mentioned how after killing Mahatma Gandhi, RSS leaders were planning to kill Nehru and Jayaprakash Narayan himself.

On 29 March 1950, addressing a public meeting at Patna Jayaprakash Narayan said, “During the days following the murder of Mahatma Gandhi the Hindu communalists openly said that after Gandhiji it was going to be the turn of Pandit Nehru and Jayaprakash Narayan to be killed.” (Vol. 5, pp. 360-61) Similarly, on 23rd June 1966, JP in his letter to Indira Gandhi expressed his apprehension about RSS while writing, “Godse thought that Gandih Ji was a traitor. The RSS thinks that Jayaprakash is a traitor.”

Remembering a violent confrontation with RSS, on 13 Oct 1973, JP writes, “I have been bitterly attacked by the RSS for some time. I cannot forget the occasion when, on the eve of our departure on a goodwill mission to west Pakistan (Bangladesh) my wife and I, Mr and Mrs JJ Singh were besieged by the fencing RSS volunteers and their supporters at the Town Hall in old Delhi where for nearly two hours they kept up the refrain “Gaddar ko nahin sunenge”, “Gaddar ko Phansi do”. There it was that a young man shouted, as I was entering the Hall, “just tell us how you maintain yourself and then “Pakistan ka Pitthoo”. I was denounced by Jan Sangh for my views on Kashmir and friendship with Sheikh Abdullah.” (Vol. 10, pp. 184-85)

Even though Jayaprakash Narayan agreed to not doubt the RSS about their position in the Sampoorn Kranti Movement or in Janta Party, he remained vigilant about the activities of RSS and Jana Sangh till his last breath. In a letter to Janta Party’s Prime Minister Morarji Desai on 1 March 1979, JP writes, “The demon of communalism also is raising its head again. The riots which have taken place at Aligarh and other places are quite revealing. Some persons have again raised the phantom of the RSS. We can brush aside Indira Gandhi’s accusation against the RSS as motivated by politics. However, it is a serious matter if any member of the Janta Party, whether belonging to the RSS or not, participates in communal riots. There should be no place for him in the Janata Party. There is no need to show any mercy towards him.” (Vol. 10, p. 813)

Right from 1948 till the end of his life in 1979, JP advocated strict actions including complete ban on any organisation involved in communal riots, acts of national disintegration or anything dangerous for indian democracy.

Jayaprakash Narayan was one among the first few who demanded ban on RSS in 1948 after the death of Mahatma Gandhi. In a speech at a public meeting at New Delhi on 2ed Feb 1948 JP said, “I urge for the immediate banning of all communal organisations the country like Hindu Mahasabha and RSS.” (Vol. 4, p. 210) Indian Government banned RSS on 4th of February 1948.

Jayaprakash Narayan remained affirmed on his position to ban RSS. While addressing the Conference of the Anti-Communal Students Front at BHU on 14th Nov 1948, JP said, “All communal organisations like RSS, Hindu Mahasabha, Muslim league and others must go. Communalism is the greatest enemy in the country at present.” (Vol. 4, p. 191)

Indian Government lifted the ban on RSS on 11th of July 1949 but JP kept asking Indian Government to be vigilant on all communal organisation including RSS, Hindu Mahasabha, Muslim League and Akali Dal and extend ban on them. In a public meeting in Patna on 26th January 1972 JP said, “May I suggest to the Government of India to ban at least those political parties in this country who still flaunt unabashed their communal character by their very name and action, such as the Hindu Mahasabha and the Muslim League.” (Vol. 9, p. 715)